In August of 1980, during the All-Japan Pro Wrestling’s aptly named Summer Action Series II tour, the action could not have been much hotter.  We witnessed a rare sighting, the NWA World’s Heavyweight Championship changed hands. However, more surprisingly within five days in between the 4th and 9th of September – it had changed twice. Yet for Japanese wrestling fans, this has now become a regular occurrence.

Shohei “Giant” Baba was crowned the king of professional wrestling on Thursday 4th September 1980 at the Sports Center in Saga, Japan when he defeated Harley Race for the World Heavyweight Championship.  The 6ft 11inch monster clotheslined the champion off his feet and the Japanese legend gained the three count to win the belt in front of 4,500 of his homeland spectators.  Although just a mere five days later in Otsu, Shiga, Race would claim the championship back and head back to the States with the strap in tow.

The Baba victory over Race meant that the owner of AJPW became the 21st NWA World Champion since its inception in 1948.  This was the Giant’s third time he had worn the belt and the third time he had lost it in a matter of days.  Despite the three title reigns, Baba has only held the championship for a grand total of 19 days so the wrestling fans in the Orient are getting too familiar with these title changes.

His first World Title was captured against Jack Brisco in Kagoshima, Japan on 2nd December 1974 but before he could take the belt home to his family for Christmas, Brisco had pinned him in Toyohashi just seven days later to board the plane home with the gold.

Baba actually defeated Race for his second reign but again only held the title for a week.  On October 31st 1979 in Nagoya, Baba used a running neck breaker to put Race away and claim the strap, but Race reversed Baba’s attempt of a Flying Body Press into a pin in Amagasaki to begin his fourth reign with the prestigious championship.

Their rivalry began in 1969 and they became quite acquainted with each other since meeting in the ring over 150 times, whether it has been in singles or tag team matches. The Japanese Wrestling Association, which was founded by Rikidozan, played host to Race’s first encounter on Japanese soil.  By the end of the sixties, Rikidozan, the legend that brought professional wrestling to the land of the Rising Sun, had passed away, however, by this point but his two major trainees were making big waves in the business – Antonio Inoki and Baba. 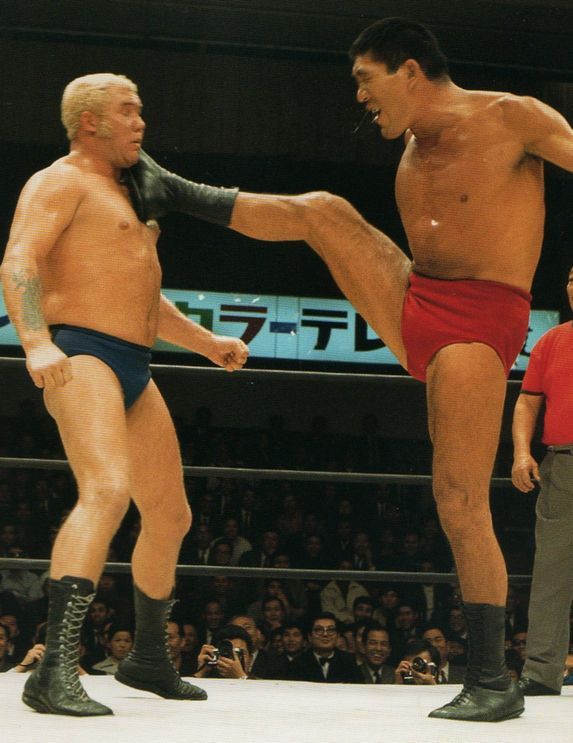 Inoki and Baba were teaming up to sell-out houses across the country and Harley’s debut in the country was a loss to Rikidozan’s proteges in a tag match with Bull Ramos partnering Race in Korakuen Hall on November 14th.  Although he and Ramos experienced a defeat that night, this was Race’s initial bout in over 300 matches in the country, he even stayed on tour for JWA for one whole month until mid-December 1969.

Race has become a popular draw in All Japan and many of the Japanese faithful refer to Harley as “Mr Pro Wrestling”. Well for the second year in a row, Mr Pro Wrestling dropped the title to their hero but has flown back into the States with NWA World Heavyweight Championship intact.

Shohei Baba was one of the most influential men in the professional wrestling business and he saw great insight to join the National Wrestling Alliance in 1973.  Gaining the membership meant he was the exclusive promoter of that title in Japan, and bringing the champions over the Pacific to defend the belt was big money for the promotion and great prestige and credibility.

Appearing on Japanese soil, made Jack Brisco, Dory and Terry Funk and Harley Race into genuine stars in the country.  In addition, the champions loved doing Baba’s tours because it always meant they were paid well, free flights and hotels, a personal chauffeur and somebody to carry their bags.  Baba made sure that these champions were treated like royalty.

Holding the NWA title three times meant each of Baba’s reigns elevated the championship in Japan and aided Baba in his war with Inoki’s New Japan Pro Wrestling promotion.  The first title win in 1974 against Brisco was a deal brokered by Terry Funk, who had helped Baba book American talents on his tours. However, unbeknownst to the NWA, was that Brisco received $25,000 from Baba for the title switch in an underhanded move to slight the Alliance board.

Without the board’s approval, Brisco and Baba had basically gone into business for themselves and the following two reigns were similar deals with Race.  Though by 1979, the lack of leadership within the NWA, ensued that although these were not approved by the board they were tolerated.  Holding the title and writing himself in the history books endorsed Baba as a national hero in Japan and helped him maintain the upper hand over Inoki in the process.