Kansas born Orville Brown was the first-ever World Heavyweight Champion of the National Wrestling Alliance (NWA) after the organisation’s formation in 1948. This was a title he never lost as he was forced to retire just over a year later.

At the beginning of 1931, Brown met a local wrestling trainer called Ernest Brown, who persuaded Orville that there was a decent wage to made in the ring. He began training with a daily regime of running before breakfast, his day job of blacksmithing and gaining wrestling experience with Ernest in the evening. And by the time October rolled around that year, Orville made a winning debut that started an undefeated 72 bout streak.

With short legs and a long body, Orville was physically strong and he became a legend in the Midwest area and spent many years wrestling for the Midwest Wrestling Association (MWA).  Realising there was money to be made from professional wrestling, by Orville was the age of 32, he began promoting wrestling matches with Kansas City promoter George Simpson. The partnership worked well with Brown compiling the card and Simpson promoting these with the press.

At the time of the NWA formation, Orville was the MWA champion, a title he held eleven times. He was chosen by the NWA board (which he was a prominent member of) to become the first NWA Heavyweight Champion. Instead of creating a new title (shown below), Brown had two plates made to cover up the words ‘Midwest’ and ‘Association’.

However, much to the NWA’s displeasure there were many ‘world’ champions in circulation and these needed to be unified to recognise one champion. Plans were put in place for Brown to meet National Wrestling Association (yes, another NWA) champion Lou Thesz. The bout was due to take place on 25th November 1949 but it, unfortunately, was not to be.

Orville and in-ring rival Bobby Bruns were driving to a show on November 1st in a 1949 Cadillac Sedan. A semi-trailer truck stalled on the side of the road and Sedan crushed underneath the vehicle (see newspaper cutting below). Brown and Bruns were seriously injured. Orville suffered head injuries and paralysis down one side, and despite determined to make a comeback, sadly he never wrestled again. Thesz was awarded the NWA title.

However, Brown remained active in the wrestling business as a booker and promoter until retiring in 1963.  He lived with his wife Grace in Missouri until his passing in January 1981.  He was 72 years old.

Brown was a fantastic wrestler who held great achievements wherever he stepped into the ring, but he holds acclaim which no other human being can – he was the first-ever NWA Heavyweight Champion. 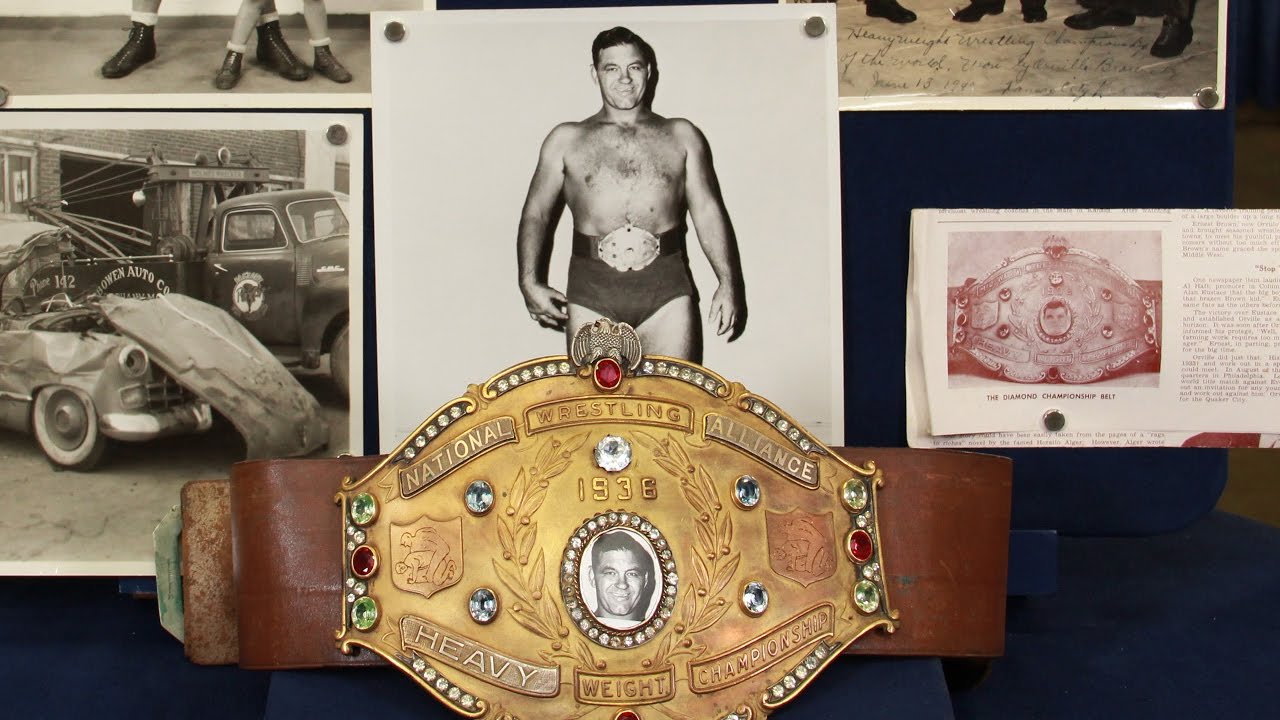