It is speculated through many in the professional wrestling business that the National Wrestling Alliance would not have excelled without the legitimate athlete Lou Thesz at the helm. He is arguably the most celebrated professional wrestler of the mid-20th century.

Born on 24th April 1916 and raised in St. Louis, Missouri. Thesz’s love for wrestling began after his father took him to a match at eight years old and he was instantly intrigued by the sport. His father Martin, was a former Greco-Roman wrestler and coached his son some techniques, which he picked up in his native Hungary before emigrating to the States in the early 1900s.

This early experience in amateur mat wrestling gained Lou confidence and he began to enter professional wrestling competitions at aged 17.  He started competing in St. Louis’ and the city’s passion for professional wrestling was vivacious and all the wrestlers were cashing in under the pencil of Tom Packs. The promoter Packs had been keeping an eye on Thesz’s progress on the semi-pro circuit and he was noticing that young Lou was becoming an attraction.

Working under Packs was where Thesz would meet catch-as-catch-can grappler George Tragos, a legitimate shooter. A former three-time Olympic wrestler for Greece, was an expert in submission skills, he was well-known for stretching his young apprentices at his gym. Packs suggested to Thesz that he should join Tragos’ gym sessions to hone his craft. After all, Tragos had a great reputation nurturing young wrestlers with Joe Stetcher and Ed “Stranger” Lewis listed as former proteges of Tragos at the University of Missouri.

Thesz trained seven days a week under George for two years and Tragos become a great influence. Lou continued to work for Packs along the way making a name for himself in St. Louis. However, through the relationship created with Tragos, Thesz met the legend of Ed “Strangler” Lewis and the young upstart challenged Lewis to a shoot contest. Thesz stated it his “longest 15 minutes” of his life. The then 46-year-old man mountain Lewis reportedly humiliated and beat up Thesz but Lewis saw the respect, determination and the willingness to learn in Thesz and “Strangler” became Lou’s mentor.

By the time December 1937 had rolled around, Thesz had hit the road touring around the likes of Minnesota, Iowa and Nebraska and became the youngest World Heavyweight Champion at only 21 years old. After a career-making match against George Zaharias, Packs booked Lou into his first title shot. He defeated Everett Marshall via a count-out for the American Wrestling Association World strap and hundreds of fans climbed into the ring in celebration and lifted Thesz above their shoulders.

Even though Thesz’s reign only lasted a matter of six weeks, he had become a major attraction. He continued touring across the United States claiming many titles in various promotions but in 1949 his world changed. The National Wrestling Alliance was set-up in 1948 (for the full story on this – read here) and Thesz was set to challenge Orville Brown for the NWA World Heavyweight Title. A title with plans to unify all belts and the titleholder becoming the single World Champion for professional wrestling. Unfortunately, Brown was involved in a car accident and could not compete and Thesz was awarded the title.

By 1953, the NWA expanded into 30 affiliates in the US, Canada and Mexico which gave Thesz many venues to conquer, and he held onto the NWA championship for six years, three months and 16 days, a record for a wrestling champion. On March 15th 1956, Thesz dropped the title to “Whipper” Billy Watson in front of over 15,000 fans in Toronto, Canada. Thesz took six months off to get a much-deserved rest and recover from an ankle injury, but he returned to claim the title back in November that year in St. Louis.

In June 1957, Thesz battled former gymnast, Edouard Carpentier in Chicago in a Best of Five Falls match. The match was tied at 2-2 when Thesz claimed a legitimate back injury and was unable to continue – Carpentier was declared the winner. However, as this was not an official win sanctioned by the NWA board, they chose not to recognise the title change, proclaiming that the belt could not change hands due to injured opponent.  Despite the NWA’s announcement, some promotions did continue to acknowledge the title change. Thesz defeated Carpentier by disqualification a month later in Montreal but only some territories backed Thesz as the champion again, although the NWA still does not recognise this linage.

Thesz gained massive notoriety in Japan as later that year he became the first wrestler to defend the NWA World Heavyweight Championship in Japan. He battled Japanese wrestling legend Rikidozan in a series of one hour draws. These matches vastly aided commercialise professional wrestling in the land of the Rising Sun and helped the sport gain acceptance throughout the Japanese public. The first match can be seen on our YouTube account here. 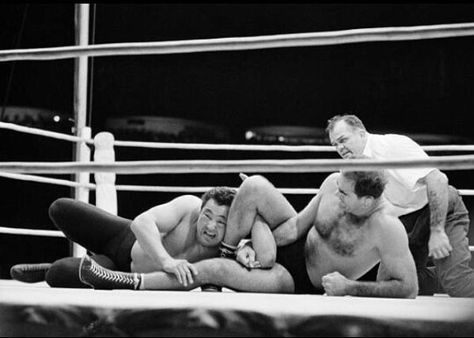 With his newfound fame in Japan, and the money that came with it, Thesz asked the NWA board to regularly defend the title over there but the request was rejected. Thesz then wished to drop the title to friend Dick Hutton on 14th November 1957 and NWA sanctioned the change. This allowed Thesz to book his own tour of Europe and Japan, billing himself as the NWA International Heavyweight Champion, a title that All Japan Pro Wrestling adopted. During his time away from the States, Thesz became one of the only few men to wrestle in front of The Queen.  He wrestled to a draw at the Royal Albert Hall in England on 11th December 1957 against Indian wrestler Dara Singh. Thesz saw this is as a tremendous honour and one of the highlights of his career.

By the start of 1963, Thesz was back in possession of the World title dethroning long-time rival “Nature Boy” Buddy Rogers in a one fall contest in Chicago. The wars with Rogers were unique for wrestling at the time. Thesz, a professional athlete, a world-class wrestler and submission specialist against Rogers, who oozed charisma, bleached blond hair, possessed great strength, tremendous physique and pure arrogance. Rogers was reluctant to drop the title back to Thesz so the threat was there that Lou could shoot on Rogers and make him give him up the title.

However, this was to be Lou’s final reign as three years later he dropped the strap to former American Footballer Gene Kiniski on a Sam Muchnick promoted show in St. Louis. Thesz was 49 years old but he was not ready to retire and wrestled part-time for the remainder of his career until his final match in 1990 in New Japan Pro Wrestling against protégé Masahiro Chono.

A wrestler in seven different decades, the truly fascinating life of Lou Thesz ended as he passed away at the age of 86 on April 28th in 2002. He had undergone triple-bypass heart surgery and aortic valve replacement just three weeks before his death.

Some experts claim Thesz to be the greatest professional wrestler of all time and rightly so. Today in professional wrestling, moves like the German Suplex and S.T.F. submission hold are massively integrated into the business. These were moves that Lou brought into the game and of course, there are a few guys that still use the ‘Thesz Press’.

In the documentary ‘Lou Thesz – An American Icon’, he stated that he only regretted one thing in his life… “I can’t do it again.”