Welcome to the second month in our journey and what a month February 1980 was.  We witnessed a major angle in the WWF, a true betrayal of the lowest order. There has been plenty of title changes and Harley Race has been defending the NWA World Heavyweight Championship coast to coast. Read on…

NWA World Heavyweight Champion Harley Race defended his title coast to coast this past month and retain the title even though he again picked up some losses on the way. Kevin Von Erich, Mil Mascaras and Mr Wrestling II defeated Race by DQ.  Dusty Rhodes faced Race twice and also won both matches by DQ.  One of their matches was held on the huge Star Wars 1980 card from Eddie Graham’s Championship Wrestling from Florida.

The Excite Series 1980 tour got underway with still three days of the excursion to go next month. The main event of the opening day saw a wild match as PWF Heavyweight Champion Giant Baba defended against Tor Kamata 2-1 in a Best of Three Falls contest in Okinawa. We also saw an international tag team match with AJPW regular Jumbo Tsuruta tag with Mexican star Dos Caras going to a double disqualification with World Wrestling Council star Caripus Hurricane and Mexican luchador Dr Wagner.

Tsuruta was uncrowned (23/2) of the NWA United National title in Kagoshima by big Texan Dick Murdoch after a spinning toe hold. Tsuruta had injured his leg previously in the match before being pinned by the move and tasting defeat by two falls to one.

Murdoch’s first defence of the title was a gruelling one-hour draw against Tiger Toguchi in Nagasaki on the 27/2.

Shows scattered across Dallas and Fort Worth were dominated as usual by the Von Erich boys but one of the highlights of the month was a huge brawl on 25/2 between “Maniac” Mark Lewin and Bruiser Brody. The match ended up as a double disqualification as the referee David Manning failed to control either man.

The Von Erichs are currently feuding with JJ Dillon’s Mr Hito and Mr Sakurada which rookie Kerry and older brother David defeated the Japanese pairing in Fort Worth via DQ and will be looking for a future tag team title shots.

Harley Race defended his NWA World title throughout the month in the Kansas area. He faced his former tag team partner “Bulldog” Bob Brown retaining the title all three times they faced but Brown did have some great success in his schedule. He pinned The Assassin on 14/2 at the Memorial Hall, Kansas City to become the new NWA Central States Heavyweight champion. The Assassin looked to regain on the 24th in Des Moines, IA but he lost the match and due to pre-match stipulation he will not be able to return to the area as this was a Loser Leaves Town match.

No less than 27 shows were hosted under the Florida banner this past month but none were bigger than at the ‘Star Wars 1980′ supershow at the Sportatorium in Hollywood, FL (15/2). Eleven matches were on the card with five titles on the line. In the main event, Dusty Rhodes looked to become the NWA World champion once again against Harley Race but the champion was disqualified in the Steel Cage match and retained the title.

Andre the Giant made his debut for the promotion on 22/2 in Arena Mexico tagging with Halcon Ortiz and Raul Mata defeating El Gran Markus, Tiger Jeet Singh and TNT by two falls to one in a Trios match-up.

At the beginning of February, Mr Wrestling II won the Georgia Heavyweight Title from The Masked Superstar in a wild cage match at the Omni (3/2).  On the same night, Dusty Rhodes and Terry Funk continued to take chunks out of each other in a Texas Death Match. Dusty was the victor and the feud continued on the return to Omni (24/2). Terry along with brother Dory went to a double disqualification with Rhodes and Wahoo McDaniel.

Genichiro Tenryu returned to the territory to face Baron von Raschke for two matches. The Japanese superstar lost on both occasions but will return to Georgia next month.

Austin Idol lost the NWA National TV title again this month, as Von Raschke (substituting for Idol) was pinned by Tommy Rich on the 23/2 TV show. 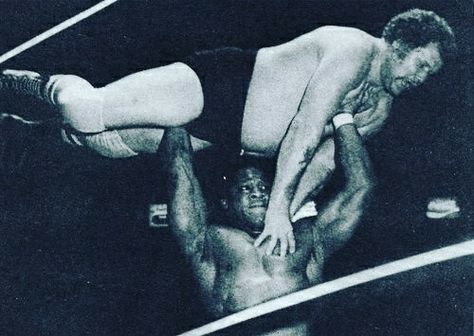 The action resumed at the Sam Houston Coliseum this month with some big crowds and great cards. On the 8th, Tony Atlas and Harley Race clashed to hype up a future NWA Worlds Heavyweight Title match.  Atlas was posing during an interview while Race intervened and Atlas pressed Race above his head before propping the champion back down. Atlas and Gino Hernandez clashed on 15/2 in a great three fall match and “Mr. USA” prevailed two falls to one.

Nearly 17,000 fans packed the Maple Leaf Gardens on a huge card on February 10th. Taking advantage of the collaboration with Mid-Atlantic Championship Wrestling, Blackjack Mulligan made his debut in the territory facing Big John Studd in a brutal Texas Street Fight. It was a winning debut for Mulligan in a brawl that use many weapons before the conclusion. After the bell, Studd attacked Mulligan with a chain leaving the Texan to be helped out of the ring. This feud is far from over. 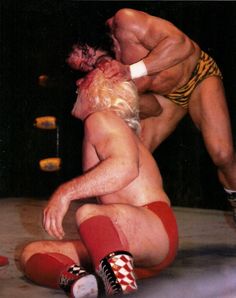 In other matches, Rocky Johnson made his Toronto debut and Ric Flair defeated US champion Jimmy Snuka but was unable to claim the belt due to a win via disqualification.

The NWA TV Title tournament continued and we are now down to the final four who will compete for the championship. The Masked Superstar defeated S.D. Jones to advance to the semi-finals. Johnny Weaver beat Paul Jones to claim his place as Blackjack Mulligan outlasted newcomer Ox Baker. Making up the semi-finals Rufus R. Jones fell to Swede Hanson and he will face Mulligan in the semis. The Masked Superstar and Weaver will clash for a place in the final.

After the horrific attack on Jay Youngblood last month, Jim Crockett Jr. suspended Ray Stevens and Greg Valentine however NWA World Tag Team champions Jay Youngblood and Ricky Steamboat were not happy with this decision as they want revenge. Crockett reversed his decision and fined and placed Stevens and Valentine on probation. The two teams wrestled through the Mid-Atlantic area but as of end of February 1980, Steamboat and Youngblood are still in possession of the belts.

Gene Anderson announced that the Iron Sheik will be on his way to territory soon. Talking of Gene, he has been involved in a few with former tag team partner Ric Flair. Flair and Gene have been touring a series of three matches with the stipulation if Flair cannot defeat Gene within 30 minutes with the Figure-Four Leglock, then the “Nature Boy” must have his head shaved. However, Flair would earn a United States title shot against Jimmy Snuka if he did win. Flair did win all three by the Figure-Four but did not win the war. Flair refused to let go out of the leglock and he was brutally attacked by Snuka. “Superfly” piledrove Flair on the floor and slammed his head into the ring post. Flair stated in an interview later in the month that he needed 36 stitches in his head from the attack. Flair met Snuka many times across the country this month (including in Maple Leaf above), but Snuka still has possession of the belt at this time. This feud will no doubt continue throughout next month as Flair hunts for that title.

The New Year Golden Series completed in February with a huge title change on the final date (8/2) in the Tokyo Metropolitan Gym. Stan Hansen defeated Antonio Inoki for the NWF World Heavyweight Championship via a count-out after Hansen hit Inoki with a vicious lariat on the apron sending Antonio down to the ground. Despite a valiant attempt to get back in the ring, Inoki failed to beat the referee’s count.

Tatsumi Fujinami had a busy month, before flying stateside to lose the NWA World Junior Heavyweight championship to Mike Graham, he faced Dynamite Kid (7/2) in the match of the month for the WWF Junior Heavyweight title. Fujinami overcame the Englishman in a close-fought contest in just under 15 minutes.

At the end of the month, NJPW presented a mixed martial arts Supercard in Ryogoku Kokugikan, Tokyo with Antonio Inoki successfully defending WWF World Martial Arts title against Karate expert Willie Williams. The match ended in a draw after both men toppled over the top rope and continue to scrap on the outside. 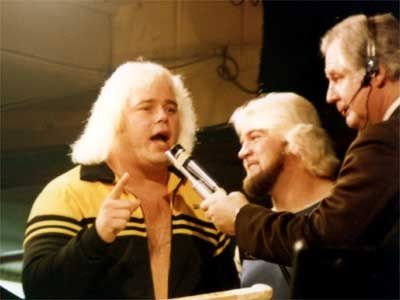 Buddy Rose was busy this month, after defeating Rick Martel on the 9th at the Sports Arena, Portland, the “Playboy” had to defend his PNW Heavyweight Title against Frank Dusek on 16/2. He overcame Dusek despite interference from Roddy Piper. Rose has recently challenged Piper to a hair vs. hair match and although Piper has accepted, the match has yet to be arranged.

The war between Killer Karl Kox and Dick Slater raged on much to the delight of the Knoxville wrestling fans. The Civic Coliseum played host to two brutal contests both won by Slater. On the 3rd, Slater won a Steel Cage match and a Brass Knuckles match on the 21st.

NWA World Champ Harley Race was defending the title against Ron Fuller in Mobile Alabama under the Southeast banner.

It was announced this month that NWA Southeastern Champion Ole Anderson will defend against Killer Kox at the Civic Coliseum next month. We’ll have news of that next time.

A World of Sport regular British big man Giant Haystacks made his debut in Calgary this month but was repackaged as Loch Ness Monster. He won three of his four matches until he lost by count-out to Jim Neidhart on the 29/2 show.

Only two events (11/2 and 25/2) in Vancouver this month but The Sheepherders defeated Stan “The Man” Stasiak & Dutch Savage to become the new NWA Canadian Tag Team champions on 11/2.  Roddy Piper and Buddy Rose continued their feud from Portland exchanging wins on the two events.

Andre the Giant returns to the promotion next month on the 10th March.

On February, Larry Zbyszko got his wish and an exhibition match with his mentor Bruno Sammartino. As the scientific bout went on Zbyszko grew frustrated as he was outclassed by Sammartino. Zbyszko ended up on the outside and Sammartino held the ropes open for Larry to return to the ring. Zbyszko snapped and laid boots into his mentor then smashed a wooden chair over Bruno’s head leaving him a bloody mess. The crowd erupted in boos as Zbyszko continued his assault and Sammartino was left lying, drenching the mat with his blood and exited the ring on a stretcher. A truly shocking angle.

Other big news coming out of the promotion is that Vince McMahon Jr. and his wife Linda has formed Titan Sports, Inc. This company will be used to promote the WWF wrestling events and Ice Hockey games.

Our recommended match this month comes from New Japan Pro Wrestling’s New Year Golden Series tour as Tatsumi Fujinami defends the WWF Junior Heavyweight Championship against the Dynamite Kid. You can watch the full match below.

All Japan: The Excite Series resumes in March and AJPW begin the 8th annual Champions Carnival tournament with a star-studded line up of Jumbo Tsuruta, Abdullah the Butcher, Giant Baba, Terry Funk, Dick Slater, Ted DiBiase and Tiger Toguchi among the names competing.

WWF: Bruno Sammartino will no doubt look for revenge on his former protege Larry Zbyszko.