**Edits made on 23rd January 2020 – thanks to Dick Bourne of the midatlanticgateway.com for correcting some of our information. Visit Amazon and buy some of Dick’s books by clicking here.**

Buddy Rogers was the epitome of a heel and it was no surprise that the National Wrestling Alliance made the decision to give “The Nature Boy” a run with the World Heavyweight Championship in 1961.  He had the wrestling ability, the great physique, the entertaining charisma and the maverick attitude and combine that with being a legitimate tough guy, Buddy became a major attraction for the National Wrestling Alliance – however, he played his part in killing it.

Rogers was born and raised in Camden, New Jersey and he excelled in multiple sports including many victories in his local YMCA’s amateur wrestling competitions.  When he turned 17, he toured as a wrestler with the circus using his birth name of Herman Rohde, taking on all who dared to climb in the ring before taking up the role of a local police officer.

Enforcing the law became tiresome and Rohde longed for a return to the ring and to be in the spotlight. Although he had no professional experience, he demanded a chance to prove himself to New Jersey promoters Ray and Frank Hanley. The Hanley brothers, impressed by Herman’s aggressive and determined attitude, offered him a spot on a card on the 4th of July 1939 – he defeated Moe Brazen.

Tutored by Rudy Dusek, Joe Cox and Fred Grobmier, he honed his craft on the road in Jersey, New York and Philadelphia, using the names of ‘Dutch Rohde’ and ‘Dutch Rogers’ until settling in Texas in 1944 with ‘Buddy Rogers’. Along with the new name came a new look: bleached blonde hair, colourful tights, tanned muscular build and an arrogant strut. This new identity yearned for a nickname and ultimately, he assumed the moniker of “The Nature Boy”.

The new character and its distinctiveness were a major box office attraction and, on the 2nd March 1945, Buddy defeated Dizzy Davis in a tournament final to become the NWA Texas Heavyweight Champion – a title he held on four occasions.

Before he came to be the “Nature Boy”, Ohio promoter Jack Pfefer named him the “Natural Guy” and Buddy went onto challenge Orville Brown in California in November 1948 for the NWA Worlds title.

Throughout the fifties, Rogers wage in a war with Lou Thesz. Thesz was the superior wrestler but failed to possess the captivating personality that Buddy was – the arrogant showman. During this time, Rogers introduced a move that has been synonymous with professional wrestling today – the Figure-Four Leglock.

In conjunction with the introduction of television, his popularity grew and he became the huge box office hit (and he knew it) and this helped convince the NWA board of directors to place the World title on him.

Rogers aligned himself with Capitol Wrestling in 1961 under the leadership of Vincent James McMahon and Toots Mondt and witnessing the crowds he was pulling in for Capitol, the NWA booked the 30th of June bout, in front of a record 38,000 crowd in Chicago’s Comiskey Park as Rogers defeated champion Pat O’Connor. 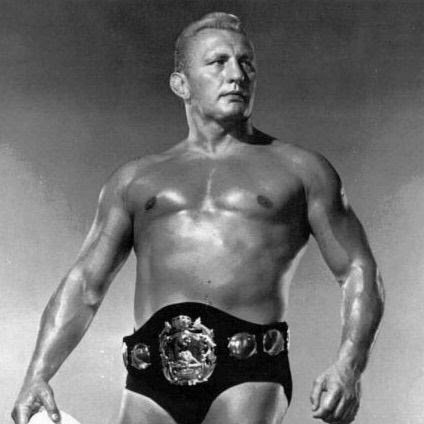 After been handed the championship belt in the middle of the ring by Chicago promoter Fred Kohler, Rogers did something no other NWA champion has previously done – accepted the title with an arrogant style. Once in receipt of the title, Rogers spoke on the mic and proclaimed…

“One thing I want everybody to know, and that is… to a nicer guy, it couldn’t happen.”.

An edict of being the NWA titleholder meant you had to pay a $10,000 deposit once in possession of the title. The NWA, wary of Rogers’ maverick attitude, upped this to $25,000 for him.  St. Louis promoter Sam Muchnick’s role as NWA president was to book the champion’s schedule but McMahon and Buddy dictated his dates and clearly favoured working the Northeast venues which helped Capitol’s business. After Northeast dates were arranged, then Chicago (Kohler), St. Louis (Muchnick), Texas (Morris Sigel) and Toronto (Frank Tunney) were locked in the schedule. This outraged the other NWA promoters.

Buddy had a successful run with monster crowds attending, and securing Rogers on their dates was making McMahon and co. wealthy, as other promotions were being bypassed. This led to many promoters threatening to leave the Alliance.

This outraged many wrestlers so much that Bill Miller and Karl Gotch confronted Rogers in Columbus, Ohio and purposely broke Buddy’s left arm. The punishment did not end there for “The Nature Boy” as Killer Kowalski legitimately broke Rogers’ leg during a match in Quebec.  To try and relax the hostility the NWA Board ordered Rogers to lose the Championship once he was healed.  His opponent was bitter rival Lou Thesz.

Even with Thesz as his opponent, who could incapacitate his opponents if he wished, the board still had their doubts that a clean title change would occur. To mitigate the risk, they ordered a one-fall match (not the usual three falls encounter) and cautioned Rogers that he would lose his $25k deposit.

Thankfully for the championship’s credibility and the wrestler’s health, the match on 24th January 1963 went without a hitch, however, the NWA would suffer long term.  Mondt and McMahon did not want Thesz as the champion as the flamboyant Rogers was a more profitable draw, and they pulled from the Alliance.

The Mondt-McMahon promotional duo became problematic for the NWA and its future as the Capitol promotion failed to recognise Thesz as their champion and Rogers was proclaimed the World Wide Wrestling Federation champion in April 1963.  It was promoted that Buddy won this new championship as the result of winning a tournament in Rio de Janeiro – although no such tournament existed. Rogers passed the title to Bruno Sammartino little than a month later in a 48-second match via a bearhug. It emerged that Rogers had suffered a mild heart attack that would stop him wrestling to a high standard the fans had been accustomed to.

Rogers semi-retired after the heart scare but his legacy influenced many future stars of the business, especially one in “Nature Boy” Ric Flair.  Buddy returned to the NWA and appeared in the Mid-Atlantic area for Jim Crockett Promotions in the summer of 1979 for a “Battle Of The Nature Boys” match with Flair. He returned to face Flair in the November that year for a series of tag team matches and eight-man tags including a singles win over Flair at The Scope in Norfolk, VA on the 22nd of the month.

He would return to the Northeast for the renamed WWF (World Wrestling Federation) to manage Jimmy Snuka and would sporadically tag with the “Superfly”.

However, his in-ring career ended after a tag match with Snuka against Ray Stevens and Captain Lou Albano where he suffered a broken hip.

After a history of heart problems and series of strokes, Rogers died on 26th June 1992 aged 71 years old.  He left an eternal but intricate legacy that inspired Flair, Hulk Hogan, Austin Idol, Buddy Landel, “Superstar” Billy Graham and beyond.  In regards to the National Wrestling Alliance, the WWWF and the future of the WWF, Buddy was financially influential in the demise of former and the success of the latter.