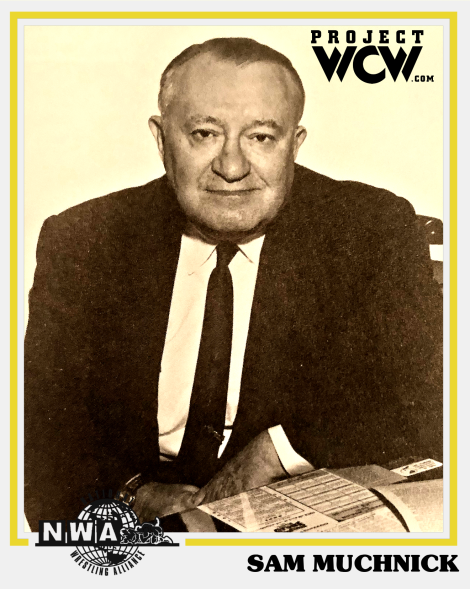 In the shady business of professional wrestling uniquely St. Louis wrestling promoter Sam Muchnick became known as “the honest wrestling promoter”. His influence within the National Wrestling Alliance was incomparable and many believe he was solely responsible for the success of the organisation.

Muchnik was born in Novohrad-Volynskyi in Ukraine on 22nd August 1905 and moved to St. Louis, Missouri at the young age of six.  Not soon after he was hooked by the sport of wrestling and even skipped his high school graduation to watch Wladek Zbyszko wrestle at the Odeon Theatre.

Sam left his first employment at the postal service in 1926 to join the sports staff of the St. Louis Times, earning $20 a week to write about Baseball team St. Louis Cardinals. In 1932, the newspaper merged with the St. Louis Star and Muchnick was subsequently offered a journalistic role there but declined.

As a journalist, Muchnick learnt great people skills and how to deal with media and politicians and working in sports had grown many connections.

Packs offered Sam a job and his understanding of the wrestling business grew. Around nine years later, with experience under his belt, Packs entrusted Muchnick to essentially run the promotion.  Sam decided to promote his own shows and by 27th March 1942, he promoted his own card. However, his plans for wrestling had to be put on hold as World War II broke out. After a stint in the U.S. Army from 1942 to 1945, Sam returned to St. Louis to try his hand at promoting professional wrestling shows, opening an office in opposition to Packs.

His shows really started to thrive. His ‘Sam Muchnick Sports Attractions’ shows would pull good money from the Kiel Auditorium by booking Steele and Lewis.  Seeing Muchnick as competition, Packs severed tie with Sam and used his connections across the country to blackball Muchnick’s promotion and the stopped the top talents from working his shows.  Muchnick was resorted to using veterans of the game, older stars while Packs booked all the young, popular stars.  Packs slaughtered Muchnick at the box office, virtually monopolising the St. Louis market.

But fortunately for Muchnick, Packs lost his wealth in the stock market and was forced to close his office. Muchnick shared his experiences and troubles in his own territory with several promoters and they agreed to form an alliance to combat this. This was known as the National Wrestling Alliance.

A meeting was held on 18th July 1948 in Waterloo, Iowa. Pinkie George (Iowa) invited Muchnick, Orville Brown (Kansas City), Maxwell Clayton (Omaha), Fred Kohler (Chicago) and Wally Karbo (representing Joe Stecher of Minneapolis) and they made an agreement to share talent within their promotions but now with anyone in competition to the Alliance. They also declared they would be one true World Champion.

Business picked up for the NWA territories and on 4th February 1949, Muchnick celebrated his first sell-out of the Kiel Auditorium which was headlined by “Nature Boy” Buddy Rogers. This was a few months after Sam offered to unite companies with Lou Thesz, who had taken over Packs’ bookings.  Although Thesz declined at that time after he witnessed how successful Muchnick’s and the NWA’s shows were becoming, Thesz then offered to Muchnick to merge promotions.

Muchnick replaced Pinkie George as NWA president in 1950 and held the role for 22 years. He elevated the organisation to its greatest heights and helped it grow in numbers. It was an extremely tough role in managing the Alliance’s greedy representatives who were looking to improve their own wealth.  His pleasant professional attitude and diplomatic style with authority policed all the troublemakers trying to hinder the NWA’s future. Sam kept the stability of the professional wrestling business for over two decades and became one of the only promoters that were respected by the all in the business.

Muchnick was an amicable, smart businessman and he had the power to make himself rich and book good friend and World Champion Lou Thesz on as many shows as he liked, but unselfishly he assured that Lou was booked fairly across the territories.  Muchnick has to take a lot of credit for the credibility and prestige that the NWA Worlds Heavyweight Championship still holds today. 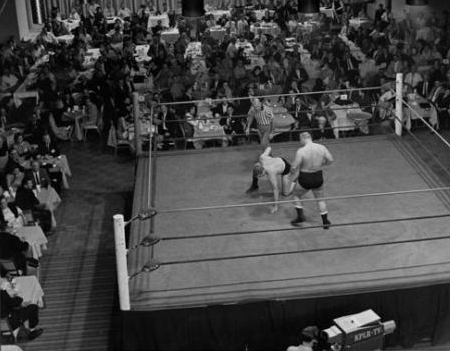 In 1959, Muchnick formed the St. Louis Wrestling Club while producing a new television program titled “Wrestling at the Chase” on Missouri station KPLR-TV, which ran for 23 years until September 1983 and produced over 1,000 episodes of the show.  The show, filmed at the Chase Park Plaza Hotel in St. Louis, holds the accolade of being one of the most popular local productions in St. Louis television history. The show developed professional wrestling into a nationally popular form of entertainment as it beamed the many stars of the NWA on the TV sets across the country.

By 1960, tired of dealing with wrestler demands and settling disputes between members of the group, Muchnick stepped down as NWA President. Although his hiatus did not last long and he was unanimously re-installed as president in 1963 until 1975, thus contributing a total of 25 years. During his second term as president, the NWA remained as wrestling’s supremacy and Muchnick expanded the Alliance globally by securing deals with territories in Japan, Europe, Mexico and the Caribbean.

Sam continued to promote until New Years’ Day in 1982, which Mayor Vincent Schoemehl named “Sam Muchnick Day”.  Shortly afterwards, the St. Louis Wrestling Club was purchased by a consortium of Bob Geigel, Pat O’Connor and Harley Race.  A year later, the World Wrestling Federation struck an agreement with Muchnick’s long-time associate and ring announcer Larry Matysik which gave the WWF access to the former TV timeslot of “Wrestling At The Chase”. 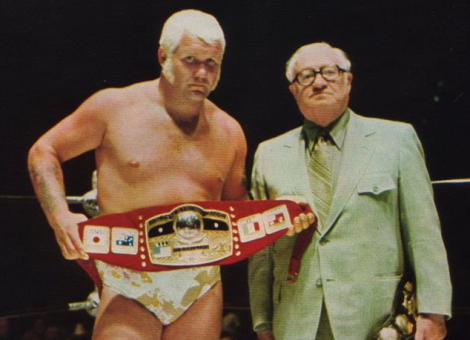 Muchnick lived to the grand age of 93 years old as he passed away on 30th December 1998, in his home of St. Louis, the city out of which his wrestling empire grew. To the day he died, he was honest as the day was long, a trait that is very rare within the history of the professional wrestling industry. Sam was truly the godfather of professional wrestling.