Holding the NWA World Heavyweight Championship for 1,131 days, former Canadian football star Gene Kiniski was one of the most successful champions in the record books.  In a time when champions were known as squeaky clean good guy wrestlers, with his aggressive nature and natural charisma, “Big Thunder” broke that precedent.

Kiniski was born on 23rd November 1928 in Lamont, Alberta, Canada before moving onto the nearby town of Chipman at an early age.  Times were hard financially for his family after the Stock Market Crash in 1929 and they moved to Edmonton by the time that Gene was 11.  By the time he was a teenager, At six feet tall with a robust build, Kiniski was a promising athlete practising amateur wrestling and football at St. Joseph’s High School.

By the time he was 20, Gene was recruited by the Edmonton Eskimos, sporting the number 50 and played defensive lineman in the Western Interprovincial Football Union, which was the predecessor of the Canadian Football League.  Quoted as making a paltry $200 a year with the Eskimos, Kiniski moved onto college at the University of Arizona and played lineman for the Wildcats and became a strong NFL prospect.  His aggression was highlighted after being chucked out of three games for unnecessary roughness.

While staying in Tucson, Gene and close friend Steve Paproski needed jobs and became working for wrestling promoter and Edmonton native Rod Fenton as ushers and selling programs at his events.  Kiniski became an asset at the events due to his size protecting the wrestlers from over-excited fans and began to start to work out at the local gyms with fellow wrestlers and Fenton and got involved in the basics of wrestling training.

It is rumoured that Kiniski and Paproski started wrestling in different towns under pseudo names so that the University would not find out, but eventually, their cover was blown and the Wildcat coach Robert Winslow demanded they immediately stop.  Later that year, although it was against the wishes of his family back in Edmonton, Kiniski decided to trade in the football pads for wrestling boots and was set to make his debut on Fenton show.

So, on February 13th 1952, donning the cover of the programs he used to sell, Kiniski made his in-ring debut at the Sports Center in Tucson defeating Curly Hughes in around 12 minutes. Gene went on to gain in-ring experience in Tucson, El Paso and Albuquerque working a few times per week.  Kiniski began working out with Dory Funk Sr. and Dory Jr. in a friendship that would work out well for both parties in the future.

By 1954, Kiniski was plying his trade in Los Angeles working NWA Hollywood TV shows frequently against a young Bobo Brazil before moving onto Hawaii to form a tag team with Lord Blears to face Japanese duo Kokichi Endo and Rikidozan.  Moving onto Dallas, Kiniski and his aggressive nature became a great draw, he was ruthless with sharp wit and possessed a mean streak.  With the vicious back-breaker as his signature move, fans were buying tickets to see Gene get beat up but much to the crowd’s dismay, Kiniski usually came out on top.

At the age of 29, Gene returned to Canada and received his first NWA Worlds Heavyweight Title shot against Lou Thesz and managed to hold the champ to a draw in front of thousands packed inside the Maple Leaf Gardens. Kiniski started to get massively over proclaiming himself as “Canada’s Greatest Athlete” and grappling with former world champions Bill Longson, Pat O’ Connor and “Whipper” Billy Watson. His trash-talking rogue persona started to turn promoter’s heads and he was booked across the States and Canada. Come 1960, Minneapolis promoters Wally Karbo and Verne Gagne broke away from the NWA and created the American Wrestling Association and they contacted Kiniski to headline their events.

Gene alternated between AWA and NWA promoted events and on 11th July 1961, Kiniski dethroned Gagne to win his first world championship, the AWA World Title.  Although the reign did not last long and less than a month later, inside the confines of a Steel Cage, Gagne regained the title.  Gene’s career went from strength to strength winning singles titles in various territories and received a WWWF title shot against top draw Bruno Sammartino at Madison Square Garden in November 1964 with over 18,000 in attendance. Kiniski believed he had pinned Bruno and left ringside with the title belt, but he was counted out. Gene kept the belt until a rematch a month later in which Bruno regained possession of his championship.

St. Louis promoter Sam Muchnick booked Kiniski to wrestle Fritz von Erich, Johnny Valentine and Dick the Bruiser. After clinching a win over former champ Pat O’Connor, Gene was awarded another shot at Lou Thesz’s NWA Worlds Heavyweight Championship. The bout, booked by Muchnick was set to take place at the Kiel Auditorium on 7th January 1966 in front of a packed house and the NWA board voted to give “Big Thunder” a run with the strap.

In a best of three falls match, history was made. Thesz went ahead with the first fall but was disqualified for throwing Gene over the top rope tying up the bout at 1-1.  After less than two minutes inside the third fall, Kiniski pinned Thesz and referee Joe Scheonberger slammed his hand on the canvas three times and Gene had become the world champion. Kiniski was the first man in history to hold the AWA and NWA World titles. 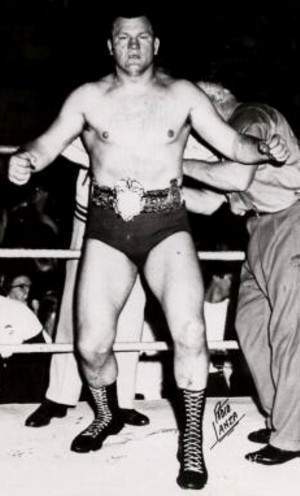 In a true contrast to Lou Thesz, Kiniski was a natural bad guy and his heel behaviour made him a very successful touring champion. He drew big crowds in all the NWA territories including the JWA in Japan where he faced Antonio Inoki and Shohei (Giant) Baba, even challenging the latter for his NWA International Heavyweight belt.  However, like many champions, the schedule became exhausting to Gene and at the NWA convention in November 1968, he told the Alliance members that he wished to drop the title.  Being a close friend to the Funk family, Gene ended his three-year reign to Dory Funk Jr. via spinning toe-hold on 11th February 1969 in Tampa, Florida.

After resting up, Gene travelled back to Japan to win the International Heavyweight championship from Baba in Osaka for a short 16-day reign before failing to the big man in Los Angeles in a rematch.  Throughout the 1970s, Gene was still a profitable draw for the NWA promoters and received many title shots against Dory, Harley Race, Jack Brisco and Terry Funk but failed to clinch that second reign.  He started to book his own shows with Vancouver All-Star Wrestling promoter Sandor Kovacs, buying out his trainer Rod Fenton’s share, and he brought many World title matches to the British Columbia area. He vastly eased up his schedule by 1976 and climbed into the ring intermittently in the early 1980s until quietly heading into retirement come 1985.  Always being the athlete for all his life, Kiniski stayed fit later in life training daily. However, in early 2010, congestive heart failure hospitalised Gene and his weight massively decreased.  He had been secretly battling cancer for years and it had grown to his brain. He passed away with family at his bedside on April 14th 2010.  He was 81 years old.

Kiniski was a true champion, a true athlete and to fill his bank account, a true heel.  Fans paid to see Gene get beat and he didn’t.  For over three years he was World Heavyweight Champion and in his own words, Gene made sure that even if the fan went home sulking, they got their money’s worth.

“When you spent a buck to see Kiniski, you got a ten dollar value.” – Gene Kiniski.